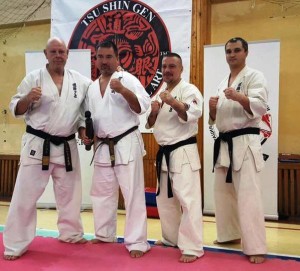 From 14 to 16 October 2016 a training camp was held under supervision of Knockdown Karate Federation of Russia in the Moscow hotel “Salute”.( Pushkin region)

Trainings sessions were conducted under the supervision of Shihan Titenkov, Sensei Zykin and Sensei Meshcheryakov.

As the main instructor two-day camp, which was attended by more than 90 athletes from Moscow, Moscow region and other regions of Russia, the president of the international Ashihara International Karate, Shihan Dave Jonkers (7th Dan), was invited for this event.

Dave Jonkers Shihan gladly shared with the participants the secrets of his skill and features training fighters at the highest level.
The culmination was the Sunday with grading of Ashihara International and Tsu Shin Gen participants.
Exam results:

Also, on the basis his contribution to the development of karate in Russia, Alexandr Yanov was awarded the rank of 5th dan .

Shihan Dave Jonkers noted that it is necessary to continue in this way and develop Ashihara Karate International in our country, as in Russia with huge potential and excellent athletes.

All athletes have stood the test with dignity, passed tameshiwari tests and spent the allotted number of fights.

Shihan Jonkers appreciated the high level of Russian athletes and excellent organization of the camp.

After the Camp, October 17th , the delegation of the Federation Knockdown Karate Russia (A.Yanov, S.Semenov, A.Zykin, N.Mescheryakov) accompanied with Shihan D.Jonkers, visited RUMA’s office and met with the President of the Federation of Karate from Russia, executive director RUMA
P .Gabbasovym.